ITS have developed a patented integration technique (RSA Patent No 2011/04587) that allows the installer to integrate our heat pumps with any existing geyser. This technique utilises a loading valve and typically increases the hot water delivery capacity of the geyser by 15%. Most of the other integration techniques commonly used will cause a reduction in hot water delivery capacity of the geyser of up to 40%. This is also one of the only installation techniques that requires no interference with the existing geyser and therefore does not affect the guarantee of the existing geyser at all. Another added bonus of this technique is that the installer can perform the installation in record time and there is no need to first drain the geyser. 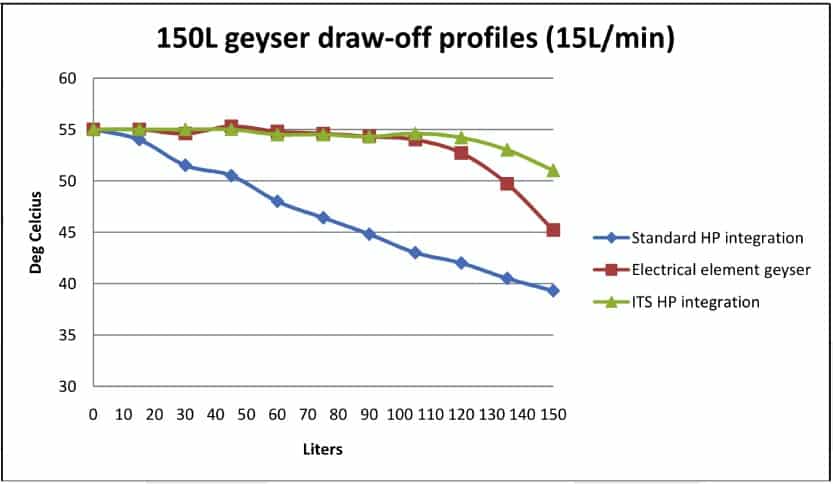 In all three cases above the geyser was heated to 55 degC and then the hot water from the geyser was used at 15L/min while measuring the temperature of the water. On the graph it can clearly be seen that when using the standard way of integrating the heat pump the temperature almost immediately starts to drop as water is being used. Practically, if the user was taking a shower for example, he would have to, from time to time, adjust the taps to maintain the same temperature of water in the shower. Also it can be seen that after about 80L are used the water gets to the temperature where the client will consider the water to be too cold. Since most people do not use 80L of water to shower this will normally happen after a second or third person have taken a shower. If someone would like to take a bath this becomes an even bigger problem.

The graph also shows that with the electrical element heated geyser almost the whole 150L is available for use. This is what you would expect form and SABS approved geyser. Interesting to note is that when the ITS heat pump integration is used with an ITS heat pump, the geyser has got even more hot water available than what the electrically heated geyser would have given.

From the above graph it is clear to see that using the ITS heat pump with ITS integration technique provides the user with the most usable hot water and therefore it is easy to understand why many installers have in the last years moved over to ITS Heat pumps to ensure that they will have no call-backs from unsatisfied clients.

Email us or complete the form and we’ll call you back.

Page load link
Manage Cookie Consent
We use cookies to ensure that we give you the best experience on our website. Are you happy for us to use cookies? Read more in our privacy policy.
Manage options Manage services Manage vendors Read more about these purposes
Preferences
{title} {title} {title}
Go to Top