How Does an Evacuated Tube Solar Collector Work?

Glass evacuated tubes are the key component of the Evacuated Tube Heat Pipe (ETHP) solar collectors. Each evacuated tube consists of two glass tubes. The outer tube is made of extremely strong transparent borosilicate glass that is able to resist impact from hail up to 38 mm in diameter. The inner tube is also made of borosilicate glass, but coated with a special selective coating (ALN/AIN-SS/CU) which features excellent solar heat absorption and minimal heat reflection properties. The air is withdrawn (evacuated) from the space between the two glass tubes to form a vacuum, which eliminates conductive and convective heat loss.

In order to maintain the vacuum between the two glass layers, a barium getter is used. During manufacture this getter is exposed to high temperatures which cause the bottom of the evacuated tube to be coated with a pure layer of barium.

This barium layer actively absorbs any CO, CO2, N2, O2, H2O and H2 outgases from the tube during storage and operation, thus helping to maintaining the vacuum. The barium layer also provides a clear visual indicator of the vacuum status. The silver coloured barium layer will turn white if ever the vacuum is lost. This makes it easy to determine whether or not a tube is operating correctly.

The Getter is located at the bottom of the outer tube. Left Tube = Good ——– Right Tube = Faulty 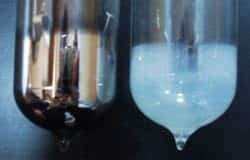 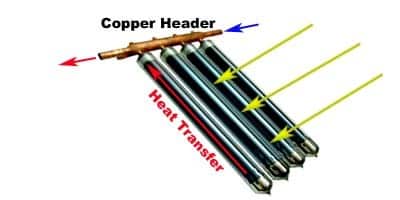 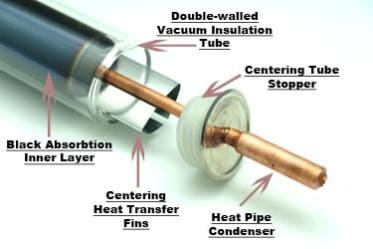 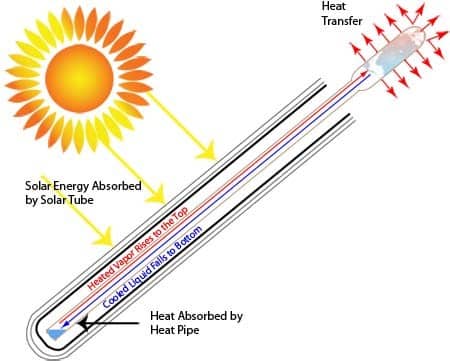 This method of heat transfer is thousands of times more efficient than a solid copper rod. Heat is therefore very efficiently transferred from the glass evacuated tube to the water. Since no water is flowing through the collector tubes and the tubes are hermetically sealed it does not suffer from corrosion problems as is the case with other solar collector types.

Unlike other types of solar collectors, ETHP solar collectors still provide excellent results on cloudy days. This is because the tubes are able to absorb the energy from infrared rays which can pass through clouds. Wind and low temperatures also have a minimal effect on the functioning of evacuated tubes due to the insulating properties of the vacuum.

Email us or complete the form and we’ll call you back.

Page load link
Manage Cookie Consent
We use cookies to ensure that we give you the best experience on our website. Are you happy for us to use cookies? Read more in our privacy policy.
Manage options Manage services Manage vendors Read more about these purposes
Preferences
{title} {title} {title}
Go to Top